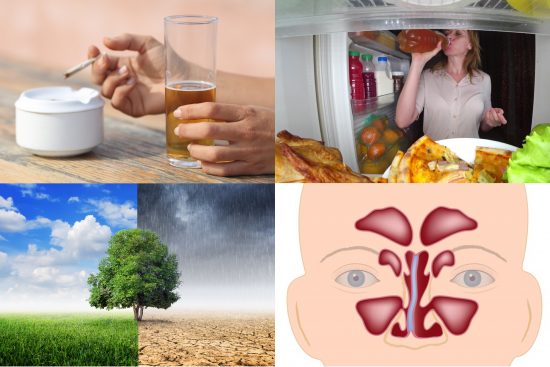 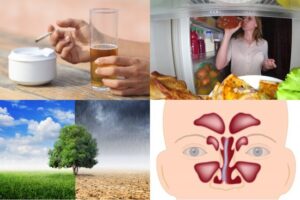 Snoring is often the result of a combination of factors. When trying to find your snoring triggers, it’s important to make note of anything that’s making your snoring worse.

However, there are things that you may not realise play a role in your snoring. Here, we explore the lesser-known factors that can make snoring worse.

Many snorers are victims of their anatomy. Humans are already predisposed to snoring due to some of the features that allow us to speak and stand upright. There are also some key anatomical qualities that make certain people more likely to snore than others …

Sometimes inherited, sometimes caused by facial trauma, a deviated septum can cause problems with nasal breathing which brings on snoring.

This is where the cartilage that separates the cavities of the nose becomes bent out of shape, making one cavity smaller than the other.

Our noses go through a natural cycle, switching preference for a nostril to breathe through (to give the other one a rest). People with a deviated septum will often notice their nasal breathing difficulties coming and going throughout the day or more importantly – the night.

When breathing through the smaller side, airflow is disturbed and snoring ensues.

Septal deviation can often be corrected with a straightforward surgical procedure called a septoplasty.

Snoring can happen if your tongue falls back and blocks your airway. People with a small and recessed lower jaw are at greater risk of tongue snoring as they have less space in that part of their airway.

Mandibular advancement devices are popular anti-snoring products; these work by moving the jaw forward to prevent the tongue falling back. Unfortunately, these devices are often unsuitable for people with a pronounced overbite as they can cause them jaw pain.

The nose is the body’s preferred breathing route. Having a stuffy nose or small nostrils can make nasal breathing turbulent or impossible. If impossible, you’ll have to mouth-breathe – a common cause of snoring. Even if you breathe through your nose but with some difficulty, extra suction forces are created which act upon your airway to make you snore.

Your snoring risk increases dramatically if the actual “noise-makers” are larger than normal. The soft palate plus the connected uvula and tonsils (the soft part behind your palate at the top of your mouth and the tissue dangling from it) are often responsible for the snoring sound. Simply put, if there is more tissue, it is more likely to vibrate and make noise, especially seeing as more tissue narrows the airway.

Often, the solution for snoring caused by your anatomy is surgery. Whilst this can work for many people, it is not always possible or effective in the long term.

Snoring is linked to your diet. However, it’s not just what you eat but also when you eat. We have heard from many of our users that reducing or even skipping their evening meal can drastically reduce their snoring.

It is thought that having full belly can exert pressure on your chest and negatively affect your breathing. This is because your lungs and diaphragm share space with your stomach and small intestine. When your stomach is very full, your diaphragm has less room to expand and contract.

A big meal too close to bedtime can also produce acid reflux, another factor that can make snoring worse.

Smokers and even passive smokers are more at risk of snoring and experiencing sleep disordered breathing [1][2]. Some studies have found that smokers are 2.5 times more likely to suffer from obstructive sleep apnea [3].

Smoking contributes to greater inflammation and irritation in the upper airway. This causes a swelling of the tissues which vibrate and make noise [4].

In addition to this, smokers experience a wealth of breathing difficulties including shortness of breath, reflux, dry throat, excess mucus production and nasal congestion – all of which are linked to snoring [5].

Being dehydrated, in addition to disrupting sleep, can also aggravate your snoring. Dehydration causes the mucus that lines your airways to become thicker than normal. This makes the opposing surfaces of your airway more likely to stick together and cause a noisy obstruction [6].

Via the same mechanisms as dehydration, living in a warm, dry environment can worsen snoring. Whilst it may not fix the snoring entirely, using a humidifier can really help.

Confusingly, for others, humid environments and changes in weather can also intensify snoring. This is often true if snoring is caused by chronic nasal conditions where inflammation responds to changes in atmospheric pressure. Indeed, many snorers report louder snoring when a weather front is moving in!

Drinking alcohol causes your muscles to relax – even more than they do normally when you fall asleep. This increases the collapsibility of your airway and heightened resistance to incoming air which can aggravate snoring.

As well as helping your muscles relax, alcohol also dehydrates. This causes the mucus in your airway to become stickier.

These work in a similar way to alcohol in that they are depressants, helping your muscles relax which can produce snoring.

Sedatives are substances that have a calming or sleep-inducing effect and come in various guises. “Sedatives” doesn’t just refer to sleeping pills, other medications (such as for those for allergies) can have a sedating effect, as can some natural sedatives.

Excessive use of decongestant nasal sprays

Nasal sprays are a popular snoring remedy for people who snore due to a stuffy nose. There are various types and each work differently.